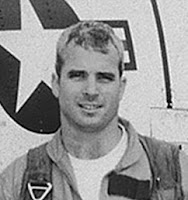 Yesterday you were an enemy. Today you are a friend. Even beyond that, a god?

As it is now with John McCain so it was also with Frederick Townsend Ward?

From the tip seen at Freeper and thanks to same.

1. "John McCain Remembered as a Friend in Vietnam, Not an Enemy"

"A small monument next to Truc Bach Lake celebrates the downing of McCain’s plane. 'The citizens and military caught Pilot John Sidney McCain,' . . . But in the days after McCain’s death, this monument has been transformed into a makeshift shrine. Admirers have been laying flowers, incense and money at the statue"

MONEY AT THE STATUE MORE THAN LIKE JOSS PAPER!

"Joss paper, as well as other papier-mâché items, are also burned or buried in various Asian funerals, to ensure that the spirit of the deceased has lots of good things in the afterlife" [joss = image in a shrine]

2. Again, as now with John McCain so has it been with Frederick Townsend Ward from a much prior conflict.

The American mercenary and valiant soldier, Frederick Townsend War, a person who exemplified the White Messiah syndrome even after his death more than a century-and-a-half later highly regarded in China, his burial site now an object of veneration. Ward deemed by the Emperor himself as worthy of being considered a joss.

"Ward is also remembered in a Songjiang Roman Catholic Church, and in a Nanjing museum. One visitor wrote 'The grave of Ward, a Protestant, revered as a Chinese Confucian hero, with a temple in his honour, now lies under the altar of a Roman Catholic church [built in 1982], whilst the land itself is the property of the local Buddhist monastery in a Communist state... Ward has not been forgotten in Songjiang and local memory still has Ward's bones under the high altar of the Catholic church'”.