I have asked myself the question and so have others. What is that strange looking helmet the Indian Army troops wear?

NOW we have the answer. The patka.

1. The patka was designed with reasons in mind to include:

* "Patka was made for the SIKH soldiers in the Indian Army (because they had to wear turban alongside and to account for this PATKA was made)". Turban underneath the Patka.

* "Patkas were actually been developed for Sikh soldiers, as they wear their ‘Pagdi’ ( Turban ) always , so initiation was to make such a platform which can be fitted easily inside Turban."

* "The 'strange' head gear that you see in the picture is called 'Patka'. It was evolved keeping in mind the tactical mobility and ballistic requirement of forces engaged in counter-insurgency operations."

* "These patkas are good for counter-terrorism ops but in war they cannot be used, especially if enemy is armed with artillery."

2. As to the protection offered by the patka:

"In terms of protection, the front section of the Patka provides protection against 7.62 x 39mm AK-47 round which is the standard weapon used by militants."

PATKA NOT SUFFICIENT TO PROTEST AGAINST ARTILLERY AND MORTAR INDIRECT FIRE WITH THE POSSIBILITY OF AN AIR-BURST ROUND DETONATING OVERHEAD! 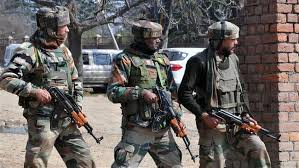 Indian Army troops on actual combat patrol in Kashmir. These are not necessarily Sikhs. The patka is worn by all [?] troops operating in Jammu and Kashmir, most versatile in counter-insurgency operations where indirect weapons fire [with air-burst] is very rare.

Yet one more image of an Indian Army soldier wearing the patka! "Patka helmets are indigenous concept of India to provide a light but effective protection to head. They are those tiny round shaped things usually can be seen with Indian armed personal in J and K [Jammu and Kashmir]. As they are smaller and do not look like typical helmets some time they are called as Head Protective Gear."

NOW you know the rest of the story and as a devoted reader to the blog are so much the better for it too!