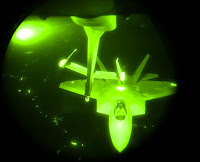 The tale of two warplanes. One ancient and venerable. The other brand-spanking new and for the first [?] time committed to a war zone.

"Two years ago, the U.S. Air Force had hope to retire the iconic U-2, first flown in 1955. But in the war on ISIS, it's all spy lanes on deck - - and those planes for retirement have been put on hold."

AS STATED, THE U-2 HAVING FLOWN FOR THE FIRST TIME OVER SIXTY YEARS AGO! DUE FOR RETIREMENT A LONG TIME AGO. THE VETERAN WITH EXPERIENCE REQUIRED.

2. "The most up-to-date F-22 Raptor jets are currently fighting Daesh"

The F-22 I was not aware of now active in the war-zone, NO WHERE else has this been covered to my knowledge. Air superiority fighter with clean lines AND THE WEAPON OF CHOICE THE SMALL-DIAMETER-BOMB! SDB carried internally not from pylons.

"The Raptors of the latest Block can drop GBU-39 small diameter bombs on ISIS targets."

"Here’s how the F-22s that take part in the air war on ISIS look at night through the Night Vision Goggles."

That F-22 Raptor now combat tested to the satisfaction of everyone? This is a big plus.

WHO CAN HELP BUT NOT TO BE IMPRESSED?

The F-111 during that era of the Vietnam War having been sent to the war zone six planes total, two of which almost immediately crashed. The record almost fifty years later is much better!