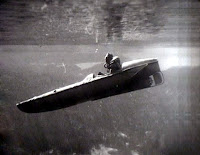 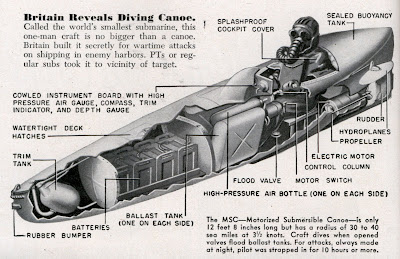 Called a "canoe" but in reality a miniature submarine, a submersible vehicle able to carry a naval saboteur to within range of a target, that diver attaching to the enemy warship or civilian vessel a limpet mine! And do so in a stealthy manner, almost undetectable!!

MSC as used by the Rimau raiders during the Second World War [WW2]. Thought also having been given to the MSC paddled or sailed [or a combination of both] in the conventional sense as a normal above-water canoe, just in case those batteries went dead.

"The canoe can also be paddled or moved by raising the mast and erecting a sail."

The value of asymmetric warfare at sea is undeniable? One large and very expensive warship at anchorage rendered impotent and non-functional by an attack from one man, one small "canoe" and one limpet mine? YES, it is so!