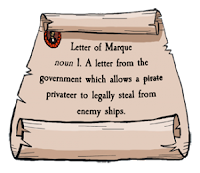 
“The Constitution gives Congress the power to issue Letters of Marque and Reprisal when a precise declaration of war is impossible due to the vagueness of the enemy. . . Pirates were the terrorists in the days of our founders and held no allegiance to any nation – the same as the terrorists of today" - - R. Paul.
From "The DC World Affairs Blog" we have the comments of Professor Hilton in response to the pronouncement of the American Presidential candidate Ron Paul.

"Another Bad Idea From Ron Paul: Letters of Marque and Reprisall" by Gregory Hilton

Letters of Marque, as issued to privateers and authorized by the U.S. Constitution, a mode of warfare now outmoded and perhaps downright illegal, as described by the Professor. Ron Paul advocating a return to a customary form of war as fought in olden times, a form venerable and even proven effective, NOW, however, privateering  outlawed [?] and passe'. A concept not even worth considering? Ron Paul is just plain goofy for thinking such a thing?

As extracted from the blog of Mr. Hilton and according to the professor:

"Letters of Marque and Reprisal have not been used in the U.S. since 1815, and they were outlawed by the 1856 Treaty of Paris which ended the Crimean War. No government uses these Letters today"

"There are bounty hunters in the United States but they are looking for a specific individual. In the war on terror we do not know the identity of enemy combatants. Ron Paul wants private citizens to operate as privateers in areas such as Somalia and Kandahar, Afghanistan. It would be similar to vigilantism"

* It may be that the U.S. is a signatory to the "1856 Treaty of Paris" but as is my understanding as with all treaties the U.S. as a sovereign nation reserves the right to withdraw from such a treaty at any time as is seen fit. Under American law, the issuance of Letters of Marque and privateering would then again become legal?

* Bin Laden was and his surviving cohorts are in the same category as a pirate, slaver, war criminal, a perpetrator of war crimes or crimes against humanity. He had by his own admission committed crimes [against all of humanity] so egregious and would liked to commit even worse crimes if he had the chance, that he had placed himself in a position where the normal legal protections no longer apply. The same holding true for his devoted followers, where ever they can be found!!

* The practice of "bounty hunting" as that term is understood is currently legal IN ONLY TWO COUNTRIES, THE U.S. AND THE PHILIPPINES! Bounty hunting is not necessarily vigilantism but is rather a means of apprehending fugitives that is within the law!

* Persons empowered by Letters of Marque would be no different in pursuit of a terrorist than would be a bounty hunter in pursuit of a wanted fugitive? The bail jumper has been said to have committed so egregious a crime against society [American] as a whole that any and all means can be made to apprehend. Even those means and measures not given to the police during a pursuit are said to be fair and legal for the bounty hunter to use. And if resistance is met during the chase, death for the culprit may occur. And good for it too!!

Bounty hunters actually in my opinion do a great service to the society at large. Removing a wanted person who has skipped bail probably prevents a lot of felonies from being committed. GOOD TOO!!

* As I recall best, during a period of the late 1970's it SERIOUS CONSIDERATION WAS GIVEN TO AND IT WAS SUGGESTED that the American government resume issuing Letters of Marque. At that time, the target was the smugglers of the Latin American drug cartels. Bad hombres their "mother ships" and cigar boats unloading their cargo almost unimpeded so thinly stretched AND INADEQUATE were U.S. Coast Guard resources. Privateers if indeed at that time being authorized would have engaged in a money making venture, the value of captured boats at auction sold for profit an incentive for ACTION!

I guess the prevailing attitude as held by Ron Paul and his acolytes is that the world be damned, the U.S. under OUR law can pursue the terrorist and no excessive international law stand in the way. And I am sure that many agree with Ron. Maybe me too?