"within Russian military circles Mikhail Kalashnikov is as celebrated for the design of the PK/PKM as he is for the AK-47 itself."

This is pretty interesting stuff. For that special Christmas gift, a one-of-a-kind type item, consider your own personal machine gun. The Soviet/Russian PKM.

Can be purchased - - ONLY SEMI-AUTOMATIC CAPABLE HOWEVER!!

Thanks to the private concern MarColMar Firearms: "Complete Hungarian PKM Collectors Package - $6,690 or a Cash Price of $6,495" 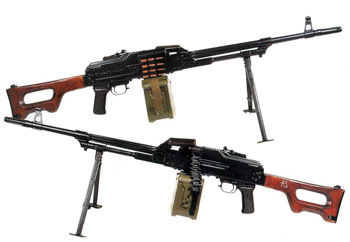 I would have to think the Soviet chose that particular caliber as they had numerous warehouses all over the old Soviet Union just BULGING with extra ammo left over from the Second World War [WW2]. That caliber and round really is useful at longer ranges of course and "chews" things up.

The PKM (Pulemyot Kalashnikova Modernizirovanniy or Machinegun Kalashnikov Modernized) is "arguably the best General Purpose Machinegun (GPMG) in use anywhere in the world today".

The BEST! "Best" of course a subjective judgment. But in this, a judgment with some justification.

From the web site of MarColMar Firearms:

The PKM is SUPERIOR TO ALL OTHER VERSIONS OF GPMG OR EVEN SQUAD LEVEL AUTOMATIC WEAPONS IN THAT THE PKM IS:

* "extremely accurate for a GPMG"

* [has] "a lot of useful accessories"

* "fewest number of moving parts for any GPMG"