Some more info, speculative, on the Stuxnet virus purported to have infected the industrial computers as used by the Iranian nuclear industry. In particular, those centrifuges used to process and extract the fissionable uranium as would be needed for a gun-type nuclear weapon.

The source in this case the Jerusalem Post, thanks to the tip from Ken:

"Stuxnet may have destroyed 1,000 centrifuges at Natanz"

"The Stuxnet virus that has infected Iran’s nuclear installations may have been behind the decommissioning of 1,000 centrifuges at the Natanz uranium enrichment facility earlier this year" 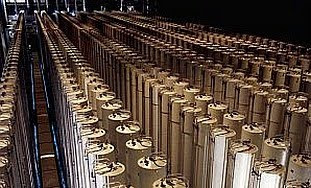 Many thousands of such centrifuges operating
in concert needed to process the uranium ore,
extraction of U-235 in sufficient quantity
and PURITY the goal!! The process being
laborious and time-consuming.
This particular photo is NOT of the
Iranian facility in question!

It is believed by some experts that Stuxnet has been active, insidious like, for over two years now, the problem only recently having been discovered. MORE THAN ONE NATION BEING RESPONSIBLE FOR THE "ROT", THE INTERNAL DISRUPTION OF THE IRANIAN NUCLEAR INDUSTRY HIGH ON THE AGENDA OF SOME PARTIES!!

"at least two countries were behind Stuxnet . . . according to a new analysis of the malicious"

The centrifuge method to extract the fissionable uranium needed for either reactors OR a bomb was a process not pursued by the Manhattan Project. The technology at the time was not adequate for the task, i.e., alloy metals of the type and quantity needed were not available.

Too, the Jerusalem Post has "inside sources" that are giving the "inside story"?

Read here the entire description of the centrifuge process as used to process uranium ore, the extraction of fissionable material the end product.