"The Ferghana horse is gamed among nomad breeds.
Lean in build, like the point of a lance;
Two ears sharp as bamboo spikes;
Four hoofs light as though born of the wind.
Heading away across the endless spaces,
Truely, you may entrust him with your life..."
-- Tu Fu, Chinese poet (8th century)

The Nisean breed of horse, now extinct, and as ridden by the cataphracts of the Parthians, THE BEST WAR-HORSE IN THE WORLD - - indeed, the BEST horse period in the world, highly prized, desired by the Chinese of the Han Dynasty. So much sought after that a war was fought - - the primary goal of which was to obtain breeding stock.

Horses as possessed by the "barbarians" of the Fergana valley, horses thought to be of the Nisean breed, called "Celestials" or "Heavenly" horses by the Chinese, AND GREATLY COVETED by Emperor Wu Di! 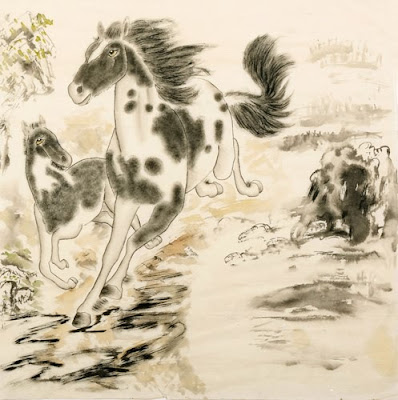 "During the Western Han Dynasty the great Chinese political explorer Zhang Qian traveled through Central Asia and went deep into the Western Regions. There, in Dayuan (now commonly identified with the Ferghana Basin) he found out about 'blood-sweating' horses, said to be the finest in the world. Zhang Qian reported this to Emperor Wudi (157-87 B.C.), who immediately saw the strategic use of such horses."

"in 104 B.C. Emperor Wudi sent a punitive expedition against Dayuan . . . from the capital Chang'an. After four years, the troops returned with a selection of superior horses, which were named 'Celestial Horses.'"

"In 102 BC, Wu-ti embarked the second military campaign in an army of 60,000 men, marching out towards Fergana. They reached the capital and successfully besieged it. They returned to China with a great haul of the famous Fergana steeds. Fergana provided them with the best celestial horses as well as 3000 ordinary stallions and mares. Furthermore two celestial horses would be sent every year. The two campaigns had lasted four years."

War as fought by the various peoples of central Asia consisted of armies the soldiers of which were accompanied by what can only be described as moving menageries, a mobile stockyard of various domesticated beasts, horses, oxen, donkeys, camels, etc. NOT only providing transport but also meat-and-fuel on the hoof!!

nisean as in the city of nisa. In ancient iran. where the parthian tribe of aryan defeated the romans. king shapur 1
Iranian warrior tribes and horses very cool