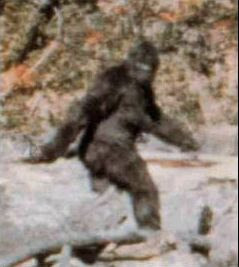 Here is another idea on how to provide American troops with realistic training. Real-world training, NOT your mundane “canned” exercise!

Place this one in the category of “strange but true”. See other blog entries of a similar nature such as Noah’s Ark, foo-fighters, ball lightning, Flying Dutchman! Para-normal phenomenon for which their is a military connection.

[this particular idea gotten from listening to the Michael Medved radio talk show. An idea Michael did not properly appreciate and had no time to discuss.]

Search for Bigfoot. The supposed eight foot tall humanoid creature lurking in the forests of the American northwest/British Columbia.

[Humanoid generally is defined as having the appearance of a human, i.e., two arms, two legs, torso, head! Upright walking on two feet!]

A creature, believed by some to exist, perhaps exist, or maybe a hoax, a fairy tale to many, an illusion without foundation! If existing, NOT a “missing link”! A distinct species unto itself,

A controversial subject, the Bigfoot, it being hard to imagine that in 21st century an eight foot tall ape-like, hairy creature could exist on the North American continent and not be known or acknowledged by modern science.

Tracks, hair, scat, “nests”, appearances of an ephemeral nature, continuing from the time of the original white settlers and even occurring in American Indian legends. BUT NEVER CATEGORICALLY CONFIRMED! NO DEAD BODY, NO CAPTURED SPECIMEN, NO SIGHTINGS BY TRAINED OBSERVERS, ETC.!!

Other crypto-creatures such as the Bigfoot are purported to exist. The Wild Man of China, the Mokele-mbembe of Gabon, etc.

The search for a Bigfoot would provide excellent training for special operations units and perhaps even similar military units of nations friendly to the U.S.!!??

Special Forces, Rangers, Navy SEAL, Marine Recon, etc. Small units [less than half a dozen men] surreptitiously entering into a remote area, setting up, again, surreptitiously, a hide-spot, hoping to glimpse and photograph a Bigfoot!! Sustaining themselves in a rough environment for an extended period of time, practicing camouflage and concealment and operational techniques in a manner so that even a wary and elusive animal cannot detect them!!

Results gleaned from trained observers are generally accepted as having much greater veracity and credibility? This is so?

One mission of deployed surveillance teams would be set up and employ wildlife “capture” cameras. Devices that have been used successfully by naturalists the world-over to “image” elusive and wary “critters” seldom seen by man in the wild.

Trained tracker-teams too. Small units, the personnel of which are trained man-trackers. Move through dense wooded areas, once more, surreptitiously, attempting to “cut-sign”, find the tracks or indications of a Bigfoot, following the creature if possible. You may even want to import Dayak woodsmen from Borneo, skilled trackers, to assist the special ops units in the “hunt”. A lot of valuable skills and techniques could be learned, abilities honed to a fine level!!

[there is NOT an element of danger here? The Bigfoot is reputed to rather pacific by nature, elusive, shy, avoiding humans, etc. NOT a killer or aggressive in any manner. Stumbling across a Bigfoot would NOT pose a danger to the troops?]

I also would not preclude the use of CSAR [combat Search And Rescue] units in the search for Bigfoot. Using sophisticated imaging devices [NOD, IR, etc.], spy-in-the-sky satellites, drones, personnel trained to find the proverbial needle-in-the-haystack!!

CONSIDERATION SHOULD BE GIVEN IN ADVANCE TO THE POSSIBILITY OF CAPTURING A BIGFOOT FOR STUDY BY THE USE OF ANESTHETIZING DARTS OR SUCH!!

There is precedent for this sort of thing? Special operations military units used to confirm or deny para-normal activities? Reportedly, the British SAS, a number of years ago now, in response to the appearance of CROP CIRCLES in an area where access was supposedly tightly controlled, deployed surveillance units, covertly, in an effort to determine the origin and means by which the crop circles were created. Never heard anything further regarding the matter.

There is too, the novel “Almost Adam”. Describes an incident where a British troop [an Indian national serving in the British army], occupying a hide spot in the Rift Valley of Kenya, hoping to espy Mau Mau insurgents, instead observes a pair of proto-human hominids, half-human, half-ape like creatures, missing links still in an evolutionary stage as mankind was 500,000 years ago. Hominids the existence of which was unknown to modern science.

[recall too from long ago my blog entry on the kouprey. Wild ox of Cambodia. Almost extinct in the wild. Soldiers operating in the remote and extreme wilds of Vietnam/Cambodia/Laos during the Second Indo-China War would on very rare occasions stumble upon the kouprey! A once-in-a-life-time-event for the participant!]

With regard to the existence or non-existence of the Bigfoot, the jury is still out?

NO specimen has ever been found, dead or alive, brought back to civilization for study, Frank Buck style!

An eight-foot tall, hairy, humanoid creature did exist in prehistoric times. Gigantopithecus. Bigfoot is a surviving member or related to the extinct species? 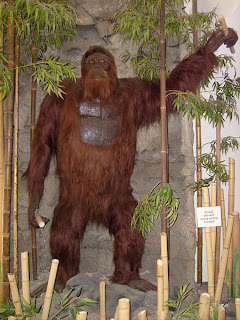 Traffic on the U.S. interstate highway system has yet to claim a Bigfoot as a victim. An individual, crossing and getting hit by a vehicle and killed. This has not happened!

However, whether a Bigfoot would be “discovered” or not is so much a concern rather THAN THE TROOPS WOULD UNDENIABLY RECEIVE REALISTIC TRAINING!! That is the whole point!!