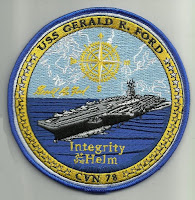 Courtesy Bloomberg and the the tip from Harry at Sharkhunters a report the up-to-date and most advanced American aircraft carrier USS Ford [CVN-78] NOT combat ready and might not well be for some period.

DELIVERED WITH ELEVATORS BUT NOT FUNCTIONING ELEVATORS! NO ABILITY TO BRINGS BOMBS AND OTHER MUNITIONS FROM THE INTERIOR OF THE VESSEL TO THE FLIGHT DECK.

"The Advanced Weapons Elevators, which are moved by magnets rather than cables, were supposed to be installed by the vessel’s original delivery date in May 2017. Instead, final installation was delayed by problems including four instances of unsafe 'uncommanded movements' since 2015, according to the Navy."

WARPLANES CAN PERFORM MISSION BUT SANS ANY MUNITIONS? SEEMS INCREDIBLE, DOESN'T IT!