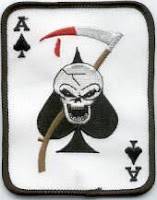 Sounds sorta sounds like Vietnam deja vu all over again!

From Mr. Lawrence and the article as seen at the Dupuy Institute Internet web site.

Statistics as bandied about by certain military authorities exaggerated and creating a false and misleading image of the true situation?

"The body count [that number of ISIL fighters killed] seems high. What appeared to be more relevant in Vietnam was the number of rifles and other personal weapons taken after the battle. The assumption was that most dead warriors left a weapon on the battlefield. Often the weapon count was less than half the estimated number of killed.It appears that the estimate of 900 ISIL killed may be high and the Iraq Army and Peshmerga reports of wounded are low. This seems to happen a lot."

My instantaneous thought was the experience of the American Ninth Infantry Division [9th ID] in Vietnam. That combat record of the 9th ID during riverine operations in the Mekong Delta during the Second Indo-China War seen as very successful based on reported body count. BUT VERY FEW WEAPONS FROM VANQUISHED ENEMY COMBATANTS EVER RECOVERED!

As it was fifty years ago as it is now and perhaps always will be?

You the devoted reader to the blog answer this question for yourself.