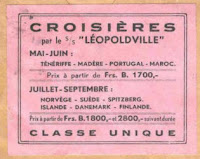 "SS Léopoldville was a 11,509 GRT passenger liner of the Compagnie Belge Maritime du Congo. She was converted for use as a troopship in the Second World War, and on December 24, 1944, while sailing between Southampton and Cherbourg, was torpedoed and sunk by the U-486. As a result, approximately 763 soldiers died, together with 56 of her crew."

Thanks to Harry and as clarified some aspects of the evacuation, that intuitive reaction of soldiers to the sinking of their ship actually quite dangerous, even downright lethal!

Regarding the sinking of the SS LEOPOLDVILLE with a heavy lost of life among American troops this observation was made in the after-action report addressed to Admiral Stark:

e) "Some soldiers were found in the water with broken necks, others apparently choked to death, seemingly by the life preserver not being secured in the proper fashion."

EDITOR NOTE: "Many died of broken necks in many sinking in the war because the men would jump from the deck into the water with their life jackets already on and fastened so when they hit the water, the life jacket stopped at the water and the momentum of the falling body caused the broken neck."

"Of the 2,235 American servicemen on board, approximately 515 are presumed to have gone down with the ship. Another 248 died from injuries, drowning, or hypothermia . . . Documents about the attack remained classified until 1996. The soldiers of the 66th Infantry Division were ordered not to tell anyone about the sinking of the ship and their letters home were censored by the Army during the rest of World War II. After the war, the soldiers were also ordered at discharge not to talk about the sinking of the SS Léopoldville to the press and told that their GI benefits as civilians would be canceled if they did so."

This threat a false threat? The military would have no jurisdiction over a civilian and "GI benefits" as legally and lawfully authorized by Congress?