The Russian Bear appearing strong but to a degree blind?

From MARCO POLO through Harry at Sharkhunters:

"Very important news from Russia is just in.  The Russians say that their missile early warning system 'Oko' (meaning 'eye' in Russian) has stopped functioning. 'Oko' consists of several geosynchronous (static in relation to the earth) satellites as well as other satellites in the 'Molnya' (meaning 'lightning') orbit, which is a highly elliptical orbit around the earth."

"Now, their last geosynchronous satellite had stopped functioning in April, 2014. The Russians are now saying that the last two satellites in the Molnya orbit also stopped working at the end of January, shutting down the whole system.  They had intended to put up a new set of satellites, called 'Tundra' in 2013, but this is being delayed. They will try to do this in coming June."

Further regarding Oko and Molniya:

"Oko . . . is a Russian (previously Soviet) missile defence early warning programme consisting of satellites in Molniya and geosynchronous orbits. Oko satellites are used to identify launches of ballistic missiles by detection of their engines' exhaust plume in infrared light". Oko apparently analogous or downright identical to the very early and now for sometime obsolete American MIDAS series of satellites.

"The Missile Defense Alarm System (MIDAS) was an American system of 12 early-warning satellites that provided limited notice of Soviet intercontinental ballistic missile launches between 1960 and 1966"Molniya orbit what it is called quite eccentric and even surprising.

"Molniya orbit . . . is a type of highly elliptical orbit with an inclination of 63.4 degrees, an argument of perigee of −90 degrees and an orbital period of one half of a sidereal day. Molniya orbits are named after a series of Soviet/Russian Molniya communications satellites which have been using this type of orbit since the mid-1960s." 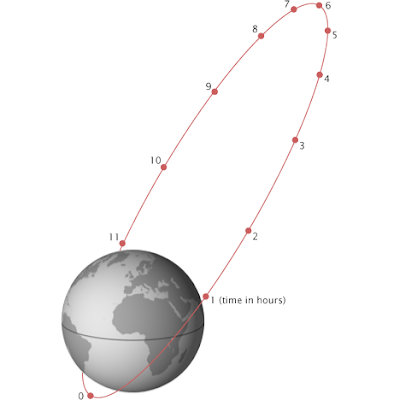 This is the Molniya orbit. This is NOT geosynchronous as I understand that term.

Molniya referring to a type of orbit around the planet but also referring to the family of Soviet/Russian military communications satellites.

"Molniya  . . . was a military communications satellite system used by the Soviet Union. The satellites were placed into highly eccentric elliptical orbits known as Molniya orbits"

That symbol of Soviet/Russian military intelligence [GRU] the bat. The Russian now as blind as the proverbial bat with regard to missile launches? At least for a short time maybe?