"The GRU [Soviet/Russian military intelligence] knows that the Italians have very good brains, the brains of great inventors." - - Suvorov.

From the David Irving book: "THE RISE AND FALL OF THE Luftwaffe
The Life of Field Marshal Erhard Milch" this extract:

"Reluctantly, he [Milch] now had to give up all hope of manufacturing Professor Gabrielli’s exceptionally fast piston-engined fighter, the Fiat G.55, in Italy."

That Fiat G.55 an Italian pursuit propeller-driven warplane superior to any German model of the period analogous to the American P-51! 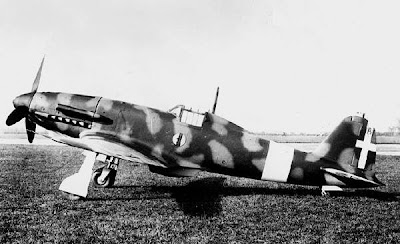 "The Fiat G.55 . . . was a single-engine single-seat World War II fighter aircraft used by the Regia Aeronautica and the A.N.R. (Aeronautica Nazionale Repubblicana) in 1943-1945. It was designed and built in Turin by Fiat. The Fiat G.55 was probably the best type produced in Italy during World War II"

NOT necessarily merely exceptionally fast BUT also superior in handling capability and most so when operated at higher altitudes. AND ALSO the best Axis propeller-drive single-seat fighter of the era.

And this determined evidently as the result of a World War Two [WW2] DACT style exercise.

"The tests began 20 February 1943 with the German commission very impressed by the Italian aircraft, the G.55 in particular . . . the G.55 was also competitive with its German opponents in term of speed and climb rate at high altitudes still maintaining superior handling characteristics. The definitive evaluation by the German commission was "excellent" for the G.55 . . . Oberst Petersen [test pilot?] defined the G.55 'the best fighter in the Axis'"

That Fiat G.55 not produced in sufficient numbers or the German able to transfer the necessary manufacturing capability into the Reich proper in time.

Johannes Steinhoff rated the American P-51 as the BEST fighter plane of WW2. The Fiat G.55 was not far behind however?

These late-war Italian fighters were never meant for mass production, comparing them to aircraft built in the tens of thousands is meaningless.

The Experten flew 109s right to the end and they wouldn't have traded for a P-51. Steinhoff's comment has to be seen in the context of his job after the war.

America's best fighter, forgotten today, was the mighty P-47 Thunderbolt. Powerful, fast, heavily armed and armoured, it absorbed the Luftwaffe's blows during the AAF's difficult days in 1942 and '43.

I think the blog entry more pertains to the Italian military engineering expertise than anything else. The Italian unrecognized geniuses of the Second World War?

You also to have remember (know) Macchi Centauro used the same engine as the messerschmitt.
Macchi was try unable to fix the problem of high torque motor
so that the wing was built 20 cm longer than the other
It was, therefore, messerschmitt kopio.
Similarly, messerschmitt a copy of the Japanese Kawasaki Ki-61 Hien (Swallow)

Bert says: Steinhoff also had a great admiration for and expressed same with regard to the various late model Soviet Lavochkin warplanes. So he could compare and was comparing in a fair manner?

Russian designers to mimic western aircraft.
Russia received by the old spitfire and hurricane and Kittyhawk machines affected by a lot of designers.
Almost all of the designers not only Yakolev, were Stalin's prison camps.

The Continuation War: La-5 was widely used by Finnish Air Force against and so many the fighter was greatly divergent views on La-5-machine performance.

According to a legend LaGG-abbreviated pilot was held in the mouth for "guaranteed! Lacquered casket" in the coming, but this type of aircraft is calling during the war was not a universal phenomenon.