From the Vietnam War era had not heard of this before.

Roadrunners. Pseudo-force unit operating under the auspices of the American Special Forces [SF].

Roadrunner having a task-tailored TO&E, small units charged with performing duty of the most hazardous and dangerous type.

"The Roadrunner teams were made up of from four six Vietnamese recruited from the Northern Provinces of South Vietnam."

"The Roadrunners were the spooks of the outfit. When they were riding out to their insertion slick they wore poncho’s covering them from head to toe. It was their job to infiltrate an NVA unit and then get away from them after they had gathered intelligence. They wore NVA uniforms and carried AK 47’s. As I recall they sometimes went in without radios. For communication, they used strips of yellow cloth that were displayed in a pattern across the body of one of the team members. Each team had a unique code. For example, a diagonal pattern from left to right might mean they were in contact and the enemy was in two o’clock direction. Another pattern might mean not in contact. There was even a pattern that meant, 'We are impostors, shoot us.' Meaning that the team had been captured and replaced by real NVA waiting in ambush." 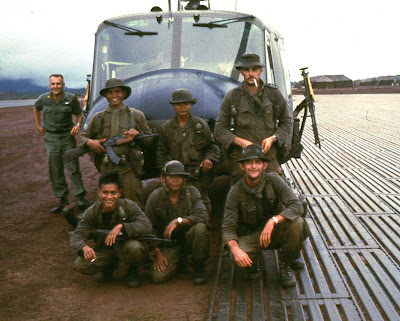 That man on the far left is an American chopper pilot, those two men on the far right might be Australians, and the other four are "Roadrunners" "extracted"?

Special markings required to designate friendly from hostile. Wearing a North Vietnamese uniform and carrying an AK could mean death from an over-zealous,  trigger-happy and unknowing American chopper pilot or sniper/hunter-killer team.

Phoenix I had heard of before but not Roadrunner. Phoenix was run by the CIA? And concentrated on civilian targets and NOT military. Phoenix also employed pseudo-force operative to infiltrate Viet Cong controlled villages, identify the communist cadres, targeting same for assassination. Phoenix WAS effective? So I understand.

And so was Roadrunner? Perhaps a devoted reader to the blog with SF experience can elaborate further?