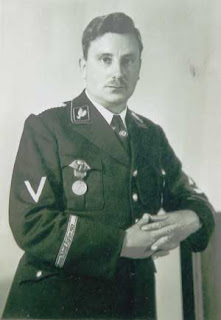 From a comment to a previous Military Thoughts blog entry of 2008:

"Don't be such a neocon. They let Hilter's driver go after the war. The whole thing is absurd." - - Dave G.

Salim Hamdan, a man who has sworn allegiance to Osama bin Laden, actually the personal chauffeur for the man [Bin Laden], tried and convicted of terrorism related charges - - incarcerated at Guantanamo for some years now.

I think also the actual charge against Salim was that he was not only a chauffeur for Bin Laden, but that he had transported MANPAD while acting as a driver for Al Qaeda. Man portable air defense weapons [MANPAD]. Pea-shooters similar to the Soviet GRAIL that do have a significant capability when in the hands of a terrorist.

And when Dave G. mentions the driver of Hitler, he is of course speaking of Emil Maurice. ALSO not merely the driver and personal chauffeur but for a time THE BEST FRIEND OF HITLER AND REGISTERED AS THE # 2 SWORN MEMBER OF THE SS!! 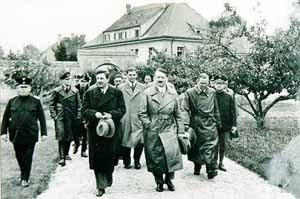 In this particular photo Maurice is to the left of Hitler, Maurice in the dark overcoat with the hat in his hands. Hitler and Maurice side-by-side, the others keeping a respectful distance. THE BEST FRIEND!

Hitler did NOT KNOW HOW TO DRIVE AN AUTOMOBILE. But did appreciate the value of the auto to society in general and promoted the German auto industry, and the development of the "peoples car" - - the Volkswagen.

To my knowledge Maurice, although never accused of any wrong doing, was investigated by the allied powers in the aftermath of WW2 and released without charges being filed against the man.

Incidentally, the word we all associate with Hitler - - Fuhrer - - is best translated not so much as leader, but rather as "driver", a man behind the wheel.

Controlling the direction thereof. Well, that WAS the case, wasn't it?