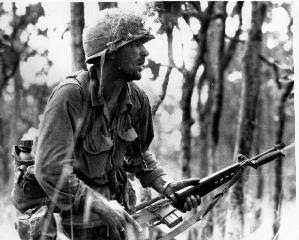 It having been apparent to me that several "best" were omitted from my original blog list, here is the remedy.

"Lieutenant General Hal Moore described him as 'the best platoon leader I ever saw'".

Rick Rescorla in particular distinguishing himself during the Battle of the Ia Drang Valley. Perhaps the worst and most difficult combat action fought by American infantry during the Vietnam War.

The photo accompanying this blog entry is of Rick Rescorla at Ia Drang. ALSO an iconic photo of the Vietnam War!

"Richard Cyril "Rick" Rescorla (May 27, 1939 – September 11, 2001) was a retired United States Army officer [Colonel] of British birth who served with distinction in Rhodesia as a member of the British South African Police . . . and as [a] British soldier"

"[a] . . . paratrooper with The Parachute Regiment . . . serving with an intelligence unit in Cyprus . . . served as a paramilitary police inspector in the Northern Rhodesia Police . . . joined the Metropolitan Police Service"

Rescorla having natural athletic ability, an adeptness at the physical combined with an intensiveness and mental abilities [law degree] - - a highly motivated self-starting individual.

"he was a sports natural, setting a school record in the shot put, and was an avid boxer." [also an outstanding rugby player.]

Rick Rescorla, his life being tragically cut-short by the disaster of 9/11, Rescorla perishing in the collapse of the WTC buildings.

An all-draftee infantry division, the first such American combat unit to be trained and deployed overseas. Was formed as a unit, trained, evaluated, deemed ready for combat, in a record sixteen months! [in all things, the 88th Division just seemed to out-do other run-of-the-mill U.S. units.

The 88th Division seeing extensive combat during the Italian campaign, comporting itself with distinction on all occasions. The 88th Division in the forefront of Operation Diadem [1944], the operation to capture Rome from the Axis powers.

The high rating accorded the 88th Division is well-merited, the calculations and pronouncements of Dupuy having an independent and most interesting confirmation:

"Shock troops or assault troops are infantry formations and their supporting units, intended to lead an attack."

"General Von Schellwitz . . . told interrogators that 'as soon as I saw where the 88th Division was being committed I realized where the main effort would be -- they have always spearheaded Fifth Army drives.'"

YES INDEED!! Praise from the enemy is high praise indeed.