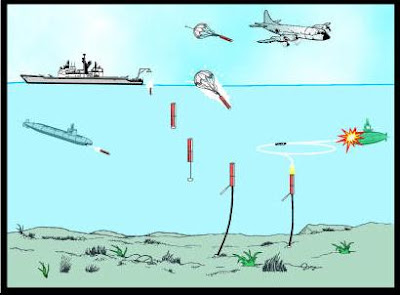 My instantaneous and intuitive reaction is that the South Korean ship suffering an explosion in the rear of the vessel, sinking with catastrophic loss of life, was probably sunk as a result of hostile action by the North Koreans.

[it cannot be ruled out that this South Korean warship was blown apart by an internal explosion!]

The North Koreans do have a very bad habit of purposefully fomenting violence of just that necessary degree as to cause an international incident, create a tenseness, a "situation" to rile up folks a lot, BUT not enough to cause a major war to erupt.

This South Korean ship was torpedoed? One of those North Korean plastic undetectable submarines is to blame?

Or rather perhaps the ship struck a mine or was struck by a mine.

"A naval mine is a self-contained explosive device placed in water to destroy ships or submarines. Unlike depth charges, mines are deposited and left to wait until they are triggered by the approach of or contact with an enemy ship. Naval mines can be used offensively, to hamper enemy ships or lock them into a harbour; or defensively, to protect friendly ships and create 'safe' zones."

"Their flexibility and cost-effectiveness make mines attractive weapons to the less powerful belligerent in asymmetric warfare. The cost of producing and laying a mine is usually anywhere from 0.5% to 10% of the cost of removing it, and it can take up to 200 times as long to clear a minefield as to lay it. Parts of some World War II naval minefields still exist, because they are too extensive and expensive to clear; some of these mines might remain dangerous for hundreds of years"

Attractive as a weapon "in asymmetric warfare". Mines tethered to the bottom, remotely activated and remotely controlled, firing a "torpedo" from the depths upward toward a passing ship. This is why the South Korean vessel went to the bottom?

From the wiki entry, of greatest interest is "types of mines" available to "belligerents".

In this particular incident involving the South Korean frigate, we have a
combinationof the remotely controlled and influence mine at work?
Activated from afar, on command, when the time is right, and ONLY attacking a suitable target!