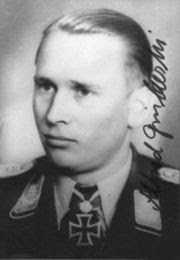 It is an amazing thing how so many of these distinguished German "aces" from the era of World War Two [WW2], themselves sustained damage during air-to-air combat, were "shot down", bailing out, parachuting to the ground, landing successfully, surviving to fight again.

Sometimes over and over.

In addition, quite often sustaining damage in aerial combat that necessitated a crash-landing, the pilot being injured in the process.

In addition to be very good fliers, aviators, combat pilots of marked ability, THESE GUYS WERE ALSO VERY LUCKY!!

German combat fighter pilots of WW2 to include: [but scarcely limited to]

"He was credited with 133 victories claimed in over 800 combat missions."

* "18 January 1943, Grislawski's Rotte was intercepted by Russian I-16 fighters and Grislawski’s Bf 109 was hit, setting [the Bf 109] on fire. He nursed his aircraft over German lines before baling out, sustaining facial burns."

And this instance of crash landing not to be ignored:

Well, only a few bruises. I guess that was not so bad. Again, German "ace" WW2 fighter pilots should not be understood to have been TOTALLY OMNIPOTENT in the skies over Europe. The "best" should be recognized as being not only exceedingly good fliers and combat aviators, but also LUCKY!