Here, from the collected works of the just recently deceased American author Kurt Vonnegut, is a letter, recently found, and placed into the public domain!

"The blood of Dresden"

"The author Kurt Vonnegut was a prisoner of war in Dresden during the allied bombing raids and was later forced to dig out bodies from the ruined city. In papers discovered by his son after his death last year, he provides a searing eyewitness account of the ‘obscene brutality’ that inspired his novel Slaughterhouse-Five"


Kurt Vonnegut. One of the most important 20th Century authors in the English language? I would think so. Prolific, writing in an unmistakable style, popular with high-school and college students. WAS ACTUALLY PRESENT [A AMERICAN SOLDIER, PRISONER OF WAR OF THE GERMAN] DURING THE SATURATION BOMBING OF DRESDEN [FEB. 1945]! WITNESSED THE SPECTACLE OF AN ENTIRE CITY BEING PUT TO THE TORCH!
"Kurt Vonnegut, Jr. . . . was a prolific and genre-bending American novelist known for works blending satire, black comedy and science fiction, such as Slaughterhouse-Five"

"Kurt Vonnegut's experience as a soldier and prisoner of war had a profound influence on his later work . . . Imprisoned in Dresden, Vonnegut witnessed the fire bombing of Dresden, a city nick-named 'Florence of the Elbe,' in February 1945"

"Vonnegut was one of a group of American prisoners of war to survive the attack in an underground slaughterhouse meat locker used by the Germans as an ad hoc detention facility. The Germans called the building Schlachthof Fünf (Slaughterhouse Five)"

The area bombing and destruction of Dresden has been referred to as an "allied war crime"! Excessive and unnecessary violence, in war time, a massacre, a slaughter, an atrocity, NOT REALLY CONTRIBUTING TO THE WAR EFFORT!

As first elaborated upon by David Irving in his book, "The Destruction of Dresden"

Download a freeware copy of the updated and annotated version of the 1960's classic! "Apocalypse 1945: The Destruction of Dresden"!

Much has been written since those terrible days of 1945 and the aftermath of the seminal work by David Irving. The consensus opinion is that the saturation bombing and mass casualties that occurred at Dresden WERE INDEED UNNECESSARY!!??

I do recall very well "Destruction of Dresden" when the book first hit the bookstalls [early 1960's]. Created a minor stir at the time, opening a "festering sore" that has NEVER properly healed.

As to the letter from the collected works of Kurt Vonnegut, long-lost letter recently discovered, my comments IN BOLD:

* "Thank heaven we’re in an ‘open city’,” we thought - - "Fortress Dresden fired a dozen shots at our [American] airmen. Once back at their bases and sipping hot coffee, they probably remarked: 'Flak unusually light tonight'."

The Open City. A concept, not heard of since the time of Manila, 1941 [1942?]? A city, DECLARED TO BE OF NO MILITARY VALUE, DEVOID OF MILITARY ACTIVITY, AND NO LONGER TO BE DEFENDED. A city declared "open" in the hope that it will be spared destruction. 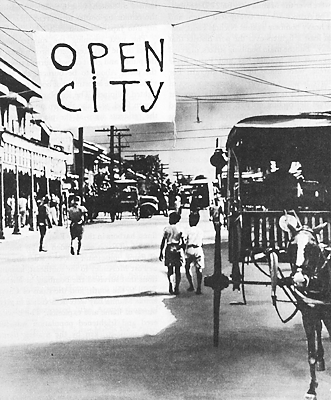 "In war, in the event of the imminent capture of a city, the government/military structure of the nation that controls the city will sometimes declare it an open city, thus announcing that they have abandoned all defensive efforts. The attacking armies of the opposing military will then be expected not to bomb or otherwise attack the city, but simply to march in. The concept aims at protecting the historic landmarks and civilians who dwell in the city from an unnecessary battle"

The entire concept of an "open city' during a time of war has gone the way of the dodo? An anachronism, a legality not to be seen again?

It is crucial to remember, also, THAT DRESDEN DID NOT ENJOY THE STATUS OF OPEN CITY! NEITHER DID ANY OTHER GERMAN CITY FOR THAT MATTER! Hitler would not have allowed such a proclamation to be made, the German did have flak emplacements within the city [?], and during the actual air raid, squadrons of German night-fighters were stranded on the ground waiting orders to sortie and take on the allied bomber force. Orders that never came! The intent to defend Dresden WAS THERE, the lack thereof NOT being a sign that Dresden had been deemed an "open city"!

* "In February 1945, American bombers reduced this treasure [Dresden]to crushed stone and embers; disemboweled her with high explosives and cremated her with incendiaries."

NO!! The initial night attack on Dresden was made by the British. A first and then second wave of bomber aircraft dropping incendiary and high explosive ordnance, area bombing, saturation bombing, designed to create a fire storm. The major damage done at Dresden was done by English Bomber Command!!

American B-17 bomber aircraft DID follow up with a daylight attack the next day, dropping primarily high explosive munitions, the target being so covered with an intense black cloud of smoke from the multitude of fires burning.

American efforts are what is called gratuitous violence. The major damage had already been done, further bombing efforts only exacerbating the situation for those on the ground.

* "To the people of Dresden: we were forced to bomb your city because of the heavy military traffic your railroad facilities have been carrying" - - "labour battalions had swarmed over the damaged rail yards and restored them to nearly normal service."

Heavy military traffic? Railroads? The allies had a means available to determine this was so? YES! German railroads did have their own version of the Enigma machine and used it extensively in radio traffic to coordinate the transport of war munitions via the railways. Encrypted radio traffic that could have been intercepted and deciphered. Dresden was crucial to the railways of Germany? Hard to say. And EVEN IF IT WAS SO, THE RAIL NETWORK WAS BACK UP AND RUNNING TWO DAYS LATER, MORE OR LESS NOT IMPEDED BY THE BOMBING!!

* "The occupying Russians, when they discovered that we were Americans, embraced us and congratulated us on the complete desolation our planes had wrought."

Dresden, the destruction thereof, was part of deal made at Yalta assist the Russians with their war effort on the Eastern Front? AND ALSO A MEANS TO INTIMIDATE, SCARE, "SHOCK AND AWE" THE RUSSIANS WITH THE CAPABILITY AND STRIKING POWER OF BOTH THE ENGLISH BOMBER COMMAND AND THE U.S. ARMY AIR CORPS?

* Strategic area and saturation bombing of this nature is NEVER TO BE SEEN AGAIN? Precision guided munitions have obviated the need for MASSES OF AIRCRAFT dropping MASSES of ordnance on a target all at once, devastating an entire city in the process. According to Christian teachings, the bombing of Dresden was disproportionate violence, NOT justified!?

Area and saturation bombing, along with the concept of the "open city", no longer has a relevancy in modern warfare!!??