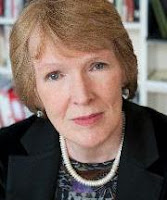 * "'The ordinary theme and argument of all history is war.'" - - Sir Walter Raleigh.

As excerpted key points in the nutshell stuff from an interview as seen in a recent edition of the BBC History magazine.

That topic war from the perspective of the historian.

An interview with: Margaret MacMillan  professor of history and the University of Toronto and the former warden of St,. Antony's College, Oxford:

1. "In your Reith Lectures, you will argue that war has been an essential part of human history. Why is that the case?"

2. "War has taken many forms through history, so how have you gone about defining it?"

A: "It's very tricky, but the closest [correct] definition I've come to is that war is an organized act of violence against another organization with the end goal of forcing the other side to do what you want."

3. "Why do you reject the assumptions that peace is the status quo and that war is simply a breakdown of that natural state?"

A: "In recent history, most of us living in the west have been extremely lucky - - we have not experienced war first hand, and we've lived through what some people call the 'long peace.'"

4. "Have people's motivation for going to war changed over the centuries?"

A: "We need to understand the motivations on two levels. Firstly, there are the motivations prompting a large organization - - whether a feudal state, a kingdom or an empire - - to go to war."

"Then there are the motivations inspiring individuals to go to war, which could be even more complicated."

THE MACRO AND THE MICRO!

5. "Has war ever benefited societies?"

A: "One of war's many paradoxes is that it has often led to progress."

6. "Will war always be an inevitable part of change and development?"

THINK THE PRONOUNCEMENTS OF PROFESSOR MARGARET NOT YEA OR NAY REGARDING WAR, MERELY THAT IT [WAR] IS!

Listen to a sampling, the Reith Lectures, Margaret MacMillan, courtesy the BBC: