"The “incursori” (submarine diver commandos) . . . armed with peculiar technological weapons they would eventually succeed in actions aimed to destroy enemy ships and bases."

"Human torpedoes or manned torpedoes are a type of rideable submarines that were used as secret naval weapons in World War II [WW2]. The basic design is still in use today. The name is most commonly used to refer to the weapons that Italy, and later Britain, deployed in the Mediterranean and used to attack ships in enemy harbours [WW2]."

More of a two-manned "wet" micro-submarine than a torpedo. Two combat divers, wearing scuba, "riding" the SLC, attacking a berthed enemy vessel from below the surface using a detachable limpet mine type warhead to do so. 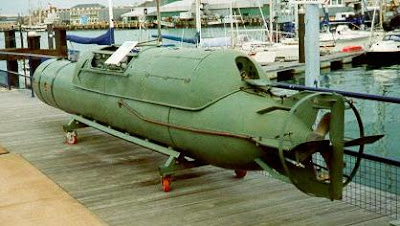 And here too is another peculiar technological naval weapon from the era of WW2. The Kaiten manned human torpedo. A Japanese "innovation". Naval asymmetrical fighters, seeking to offset a vastly greater American numerical and qualitative advantage by the use of a manned torpedo, piloted to the target by a man bent on suicide. An aspect of the Japanese WW2 "Special Attack Corps"!

An "innovative" naval weapon, possessing an immense warhead [3,500 pounds of TNT], steered by a volunteer RIDING INSIDE OF THE TORPEDO ALL THE WAY TO THE TARGET!! 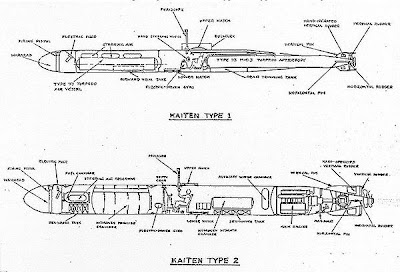 [it is not clear from any of the various web sites dealing with the kaiten whether or not the "rider" needed "scuba" or was in a "wet" or "dry" environment.]

"Kaiten. It was a steered fast torpedo and in practice was a suicide weapon."

"The Kaiten (Japanese: translated 'the turn toward heaven,' 'Turning of the Heavens,' was a torpedo modified as a suicide weapon, and used by the Imperial Japanese Navy in the final stages of World War II."

Kaiten were carried to the area of operations on the backs of conventional submarines and then launched either from the deck or fired as a normal torpedo would be!

Kaiten on paper was a potentially very effective weapon? But proved to be very ineffective in combat. Eight mother "ships" [submarines] lost and a lot of dead kaiten pilots in exchange for a total of two U.S. warships sunk! NOT a good trade.

Well, the right name of the italian commando was "DECIMA FLOTTIGLIA MAS" (the "X" means "tenth" (decima) in latin number)http://images.google.it/images?hl=it&q=decima+mas&um=1&ie=UTF-8&ei=_p1ESp_kAtSvsgbbjKgb&sa=X&oi=image_result_group&ct=title&resnum=824702785

The nickname of the "siluro a lenta corsa" was "maiale" ("pig" in english) because of the apparence.
Greetings from Italy