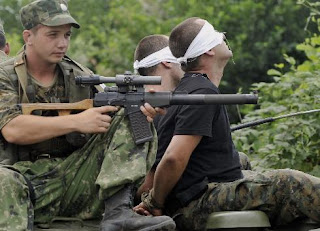 This is coolbert: Who has not seen this picture [click on photo to see a large picture]? Purportedly of Georgian soldiers, taken prisoner during the on-going conflict between Russia and Georgia. POW's, manacled and blindfolded, sitting atop an armored personnel carrier, guarded by a young Russian troop.


Please note carefully that rifle the Russian soldier is carrying. A silenced sniper rifle. Ordinarily carried ONLY by Russian Spetsnaz [special purpose troops] and those of the Russian paratroopers [VDV]. A rifle firing a 9 mm caliber round, scoped, silenced, accurate out to about 200 meters.


The Russians are now NOT using the "steamroller" approach to warfare that is characteristically their forte'? NOT using prodigious numbers of manpower, material, war munitions, employed quite often in a manner heedless of losses. NOW using a nuanced, task-tailored battle force relying upon politically reliable units that consist NOT of raw conscripts but highly motivated soldiers?


This appears to be the case?