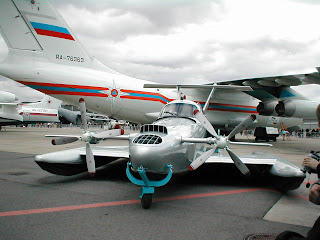 "It is a wing in ground effect vehicle"

Thanks to the very well-informed comment to the blog by the astute observer Scott!

The Iranian Bavar-2 is a "wing in ground effect vehicle", as I had suspected.

A "flying boat" with only limited potential for flight however. Uses what is commonly called "ground effect" for lift!

Ground effect vehicles [GEV] known by a variety of names:

A cross between an airplane, a boat, and a hovercraft!

"A ground effect vehicle (GEV) is one that attains level flight near the surface of the Earth, made possible by a cushion of high-pressure air created by the aerodynamic interaction between the wings and the surface known as ground effect."

A lot of research has been done into GEV, with some success, both in the military and civilian sphere. GEV "flying boats" do exist, found in both the enormous variety and the very small! 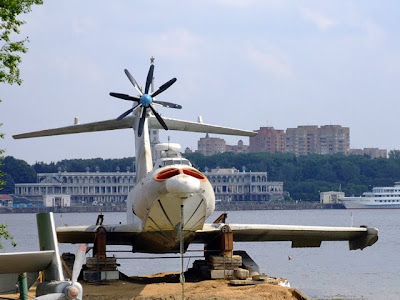 "In recent years a large number of different GEV types have evolved for both civilian and military use. However, these craft are not in wide use."

[one distinct advanatage to the GEV of large size is that you could move prodigious numbers of troops and their impedimenta at rapid speed to almost anywhgere on the planet that is contiguouos to the ocean! Movement far faster than with ordinary conventional troop transport ships!]

"GEVs have been suggested as the solution to a number of possible operational roles, with heavy lift being the most appealing attributes . . . the advantages of using WIG craft for transoceanic cargo craft, where their increased speed would reduce resupply times by at least 60%."

My thought initially was that the Bavar-2 or subsequent generations thereof would have some sort of lifting capability, perhaps a torpedo of indigenous Iranian design, however primitive. The Bavar-2, when employed in mass waves of attackers, would be able to overcome the defenses of a U.S. Navy aircraft carrier battle group and do some significant damage, torpedo-plane type attack, Battle of Midway [1942] style!

Bavar-2, however, is too susceptible to shoot-down? The layered defenses of the U.S. Navy are too potent! Phalanx [CIWS], AEGIS and even F-18 flying combat air patrol [CAP] can shred the Bavar [even massed numbers of attackers?] with impunity!