Genie fired from an American or Canadian interceptor aircraft, aimed at a swarm of Soviet long-range bomber aircraft flying southward from Siberia over the North Pole toward American cities. Genie to be used during the much dreaded global thermonuclear war.

Genie detonating among that swarm of intruder aircraft, the blast, the radiation and the heat downing the Soviet aviators in the proverbial FLASH!!

There being an actual [one-time] test of the Genie, fired from an aircraft at altitude [15,000 feet/4,500 meters], with OBSERVERS ON THE GROUND DIRECTLY BELOW WHERE THE DETONATION WAS TO OCCUR.

"A live Genie was detonated only once, in Operation Plumbbob on 19 July 1957. It was fired by AF Captain Eric William Hutchison (pilot) and AF Captain Alfred C. Barbee (radar operator) flying a F-89J over Yucca Flats at an altitude of 4,500 m (15,000 ft). A group of five USAF officers volunteered to stand hatless in their light summer uniforms underneath the blast to prove that the weapon was safe for use over populated areas. They were photographed by George Yoshitake who stood there with them. Gamma and neutron doses received by observers on the ground were negligible."

The entire episode, an escapade I would call it, photographed by George Yoshitake. George too at ground zero for the event. 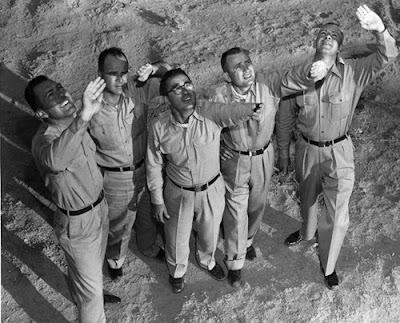 The event, the escapade, the incident as remembered by George:


“One afternoon I was at Lookout Mountain right here in Hollywood, and I got a call from a Woody Mark. He said ‘George, I need you out here tomorrow for a special test.’ I got there that night and he said, ‘Tomorrow morning you’re going to go out with five other guys and you’re going to be standing at ground zero.’ I said, ‘Ground zero?’ He said. ‘Yeah, but the bomb’s gonna go off 10,000 feet above you.’ I said, ‘Well, what kind of protective gear am I going to have?’ He said ‘None.’ I remember I had a baseball hat, so I wore that just in case. He gave me a still camera, and two motion picture cameras. These were 35mm Eyemos. I set up the two Eyemos, and had little trip wires that I could trip with my foot starting about 5 seconds before the blast. And the still camera, I also had a trip wire so that I could trip it. I could get one exposure only. The five other guys were scientists and they volunteered to be there. I wasn’t a volunteer. I didn’t find out until I got there.” - - George Yoshitake


2. George and others like him employed by the Lookout Mountain Laboratory! Photographers dedicated to capturing on film a record of the various above-ground nuclear tests. A valuable resource for those weapons designers attempting to gauge the success/failure of atomic test and measure the lethality of same.

See too this web site with some interesting photographs and imagery from the atomic test era: "Images from How To Photograph an Atomic Bomb".

For almost fifty years now above-ground nuclear testing not done by the U.S. or the Soviet Union/Russia. And perhaps NEVER again by those parties!

NOR would persons be allowed to exposure to bomb testing if an when such detonations were to resume. I am surprised that the dazzle from that Genie test did not blind those volunteers, the scientists, the observers. Those men are not wearing any protective gear and that was intentional! Had their eyes closed when the bomb went off, looking upward only after a period of time when it was safe?

hi,I have been looking the World Wide Web for this information and I want to thank you for this post.This blog is really good.Thanks.....

I think one of the five men was my grandfather who died in 2000. Is there any record with the names of the men?